Starting a campfire out in the open, whether you are throwing a party in your backyard or camping in a far-off wilderness location, can be very difficult to say the least.

It can even be much more difficult if you are dealing with issues of wind or rain or even hail.

This is why most knowledgeable and responsible fire starters take the time to bank their fire, either right before starting it or at the first sign of inclement weather.

In the following article we will talk a little bit more about properly banking a fire—what the term banking means, how to do it and why to do it—and go over some of the other basic campfire safety rules you should always strive to follow when camping in wilderness areas. 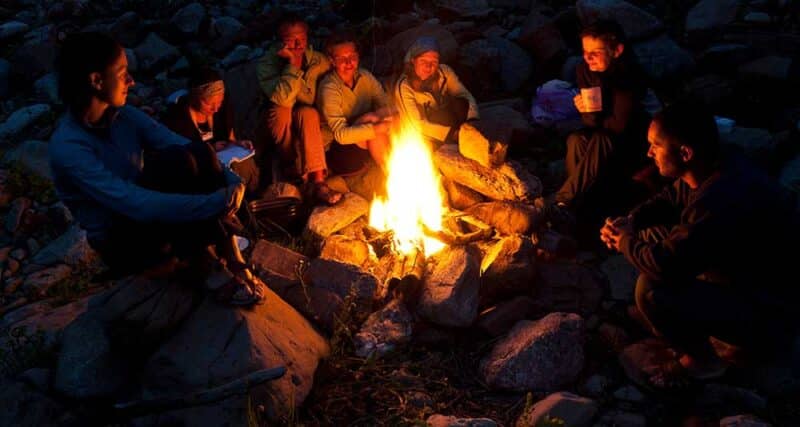 So what exactly does it mean to “bank” a fire? Actually, the term bank, at least in this case, means to slow down the rate at which the fire burns so as to preserve the embers and thus eliminate the need for starting your fire from scratch the next morning.

One of the ways you can bank a fire is to build a ring around it using rocks or other non-flammable materials. You can also build the fire very close to a rock wall or dirt wall.

Both of these techniques help prevent the fire from burning out of control, and both cut down on the actual level of oxygen that is reaching the fire, thus allowing it to burn slower and more controlled, with less flame and even more heat.

When you bank a fire, in an effort to try and preserve that fire (and the heat it emits) throughout the night, you will actually be preserving the embers of that fire—the coals that allow it to burn—in an attempt to slow down the rate at which the fuel is being consumed, in this case, the wood.

Most of us weekend and recreational campers enjoy campfires that look more like bonfires. We enjoy to see the flames leaping into the sky as the fuel is being rapidly consumed.

This is all fine and dandy for fires that will only be lit for a few hours and then extinguished. But what do you do when you actually need your fire for warmth throughout the night and into the early morning, such as in survival situations?

Are you just supposed to stay awake all night and alternate between tending your fire and searching for more consumable wood?

Obviously, this might not always be possible, but banking a fire correctly will allow you to sleep safely and can even help you conserve wood while ensuring the fire remains hot and burning all night for warmth purposes.

Simply put, banking a fire enables you to leave that fire “less-attended.” Naturally, a campfire should never be left completely unattended, but banking it will provide you with an opportunity to sleep without worrying that the fire is going to get out of control.

When to Bank a Fire

So when is banking a fire a good idea? Actually, there are several reasons why you might want to bank a fire. They include:

DIY: Steps to Bank a Fire

The first step you should employ when your desire is to bank a fire is to ensure it has some protection from the wind and elements.

Fire rings made from medium-sized and large rocks can accomplish this, as can a barrier of some kind that shields the fire. Not only will this help your fire burn low and slow and allow you to preserve it until the next morning, it also creates a protective border that helps lessen the chance that your fire will spread beyond the fire ring or wind screen.

To fully understand the next steps in banking a fire requires that you have a fundamental idea of how fires work.

In order to consistently burn throughout the night, a fire is dependent on three things: fuel (or wood), heat (supplied by the embers) and air (oxygen). If any of these three ingredients are lacking, your fire will quickly be extinguished—which would not be good on a night when the temperatures dip below the freezing mark.

Banking a fire is the process of using each of these above-named ingredients in the right amounts. Failing to use the right amounts can cause a fire to burn too rapidly and without enough heat, but properly banking the blaze allows for a very hot fire that burns exceedingly slow.

This may not be a technique that you get on the first try. You may need to experiment with these three ingredients until you master the technique of banking.

When campers and survivalists bank a fire what they are really doing is manipulating the amount of heat and airflow between the logs (the fuel). When fires are exposed to a lot of air, as you may have noticed before, they tend to have large leaping flames.

These flames can then actually carry some of the embers out of the fire pit and into the air. On the flip side, when the amount of airflow is lessened, as it is with banking, the fire will burn lower and slower, because the logs are not being consumed at such a rapid rate.

So, how do they accomplish this reduced airflow?

Naturally, if there was no air reaching the fire it would be extinguished. So what people do when banking a fire is this: they place the burning embers between the logs.

These embers cut down on the amount of the airflow without actually cutting it out, while also bringing heat to the logs to ensure they will keep burning in this low and slow fashion. These banked fires consume only about ¼ of the fuel that leaping flame fires do, and thus they tend to burn longer with the same number of logs.

The warmth given off by these managed fires is more than enough to keep someone warm throughout the night, and because the embers are being properly managed, starting a fire the next morning is made extra easy.

So for fires that burn low and slow throughout the night, simply shovel the embers on the bottom of the fire between the burning logs. This will reduce the air flow and ensure you a long lasting fire that gets results.

If you want to try this banking tip the next time you go camping, there are a few things you should keep in mind. First, before you start any fire you must first check with the wilderness agency or national park system in your particular state.

Often times, fires are not permitted in certain areas and at certain times of the year, and failing to obey these regulations can result in a hefty fine or worse.

If you are camping in a designated campsite or camping area, always use the provided fire pit for campfires. These structures are designed specifically to control the spread of accidental brush fires and must always be used.

If your campsite does not have a dedicated fire ring, you can always build your own by digging about a one-foot pit and surrounding that pit using rocks you find in your general area.

If you are going to gather wood, only grab the twigs, branches and logs that are lying on the ground. In many cases it is illegal to cut down live branches and trees, plus, these pieces of live wood are not very effective fuel sources.

Always manage your fire and the size of the flame. Campsites are for “campfires” and not “bonfires.”

Never leave your campfire unattended, and always extinguish the fire after you are finished. You can do this first by pouring water on all the embers and waiting for them to go out completely. You can follow this by placing a shovel or two of dirt on the now-extinguished embers.