A great place to live and visit, particularly for campers and outdoor enthusiasts, Connecticut is a U.S. state located in the southern New England region of the country along the Atlantic coastline. Connecticut boasts a unique mix of coastal cities and rural regions that are dominated by small, quaint towns. Because of this great combination of beachside cities and heavily forested wilderness areas the state has become one of the favored destinations among those folks seeking an outdoor, under-the-stars adventure.

Connecticut is the southernmost New England state in the northeastern United States. It is also referred to as part of the Tri-State region, along with its neighbors New York and New Jersey.  Connecticut is bordered to the east by Rhode Island, to the north by Massachusetts, to the west by New York and to the south by Long Island Sound. Its capital city and main political hub is Hartford, while its largest city, in terms of population, is Bridgeport.  Connecticut is named for the Connecticut River, a major American river that roughly bisects the state evenly.

The highest point in Connecticut, around which many weekend warriors pitch their tents for the night, is Bear Mountain, located in the town of Salisbury in the northwestern part of the state.  Despite Connecticut’s relatively small size, the state boasts some very wide regional variations in its landscape, ranging from beachfront locales to rolling hills and farms to densely forested wilderness areas. This topographic variety makes Connecticut a great place in which to camp, hike, fish, hunt, and just enjoy the state’s natural beauty.

In the following article we will highlight five of the state’s most popular and well-visited campgrounds, and describe each in great detail.  This will include the various accommodations offered in different areas of the state; the amenities associated with these campgrounds; and some of the activities offered there—activities that consistently draw thousands of campers each year. 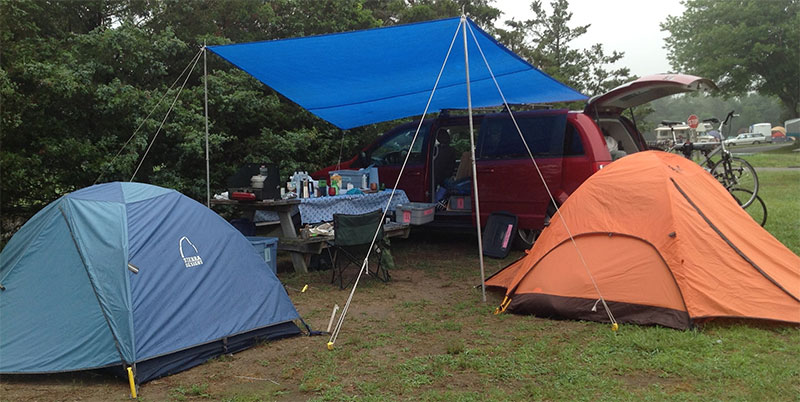 Situated in the small town of Jewett City, Connecticut, Hopeville Pond State Park offers a wide variety of marvelous campsites—sites that are guaranteed to please even the most reluctant campers in your group.  Collectively, these great camping spots offer the very best in terms of amazing sights, scenery, safety and family-friendly activities, so it’s important to book them early before all the best and most popular campsites are rented out by repeat customers, of which there are hundreds.

Although Hopeville Pond State Park is not home to a great many campsites, all of their camping areas are positioned along the shores of the massive pond and park namesake; a pond which more clearly resembles a large lake.  This well-thought-out proximity makes Hopeville Pond State Park the perfect camping area for both fishing and swimming, the latter being patrolled by trained lifeguards to ensure the safety and protection of your kids as they frolic in the cool water.

Hikers, backpackers and nature lovers will also adore the very wooded and secluded Hopeville Pond State Park, largely for its massive collection of dirt track trails that wind through the forests of pine, aspen and fir trees and among the local Connecticut wildlife.

All of the campsites at Hopeville Pond State Park can be reserved up to six months in advance. However, walk-ins are always welcome.  At the campsite you ultimately select you will find a large picnic-style table with an overhead shelter, trash cans, a BBQ grill and a rock-ringed fire pit that is perfect for campfires, ghost stories and the making of tasty S’mores.  Away from the campsites are full-service restrooms with pit toilets, running water and showers; a camp store selling all necessary camping essentials, including firewood, ice, charcoal, lighter fluid, bait, tackle and groceries; and a fun play area with slides and climbing bars coveted by small children.

Note:  Hopeville Pond State Park is an alcohol-free campground, thus making it more of a family destination rather than a campground for adult-only trips.

Located in the small town of Thomaston, Connecticut, Black Rock State Park offers the very best in camping, amenities and outdoor activities.  The park is open from 8:00 AM until sunset for day visitors. However, campers can enjoy this beautiful park 24 hours a day for the entire length of their stay. Local residents can camp at this adventurous state park for a mere $17 per night, and non-residents need only pay $27 a night for all that this wonderful campground has to offer.

Black Rock State Park has earned its namesake from the local graphite deposits that are present here, of which the early settlers of this particular region—the Naugatuck Valley—gave permission to the resident Indians to mine the area beginning in 1657.

Today, Black Rock State Park is best celebrated for its huge assortment of available outdoor activities—activities guaranteed to please every member of your group.  The park is a considered a haven for trout fishing, with pond fishing being one of the most primary recreational attractions for both those who camp here and those visiting the park on a day pass.  Black Rock State Park additionally offers a wide variety of nature trails to explore, offering hikes that range from short, 30-minute treks to those that take a half day or more to complete.  All of these trails are colorfully marked and beautifully lined with the region’s colorful trees and vegetation.

The campsites at Black Rock State Park offer a number of conveniences appreciated by campers, including level tent pads, running water, locking trash bins, and some of the most treasured scenery the state of Connecticut has to offer.  Restrooms and showers, which are positioned throughout the park, are also available, and while no camp store is present here, the local towns surrounding the park have all the supplies one could possibly need for a relaxing vacation under the stars.

All campsites at Black Rock State Park are offered on a first-come, first-served basis.

Located at 96 Ekonk Hill Road in the rural town of Voluntown, Connecticut, Nature’s Campsite has been pleasing both local and out-of-town campers for several decades now, offering its own blend of outdoor fun and seclusion amid a setting that must be seen to fully appreciate.

Past guests of Nature’s Campsite have time and again proclaimed it as the best campsite in the region—not just the finest in Connecticut but in the whole New England cluster of states. The campsites here can only be described as huge and very private, and the staff bends over backwards to ensure that every patron has a wonderful experience.

Nature’s Campsite has a number of amenities that campers adore. Each site has a BBQ grill and a covered picnic area to keep campers dry and protected during inclement weather; a fire pit for hosting roaring campfires; a level tent pad (sometimes two pads); and ample parking for at least two large vehicles or trailers.  Away from the individual campsites are a number of gender-assigned restrooms, with running water, hot showers, and pit toilets, A camp store is located at the front of the complex—a store that sells supplies such as charcoal, ice, bait, tackle, camping supplies and firewood.  Best of all, the staff at the campground will tote the firewood and supplies you purchase directly to your campsite, thus eliminating the need to schlep them back yourselves.

There are many trails surrounding Nature’s Campsite—trails for beginner, intermediate and advanced hikers and backpackers.  A small lake is positioned near the center of the campground. This is a great place to teach the art of fishing to the little ones in your group, as the fish here are small yet plentiful.

Campsites at Nature’s Campground can be reserved up to 6 months in advance, but because the facility is rarely operating at completely full capacity, walk-ins are always welcome and appreciated.

Connecticut’s Devil’s Hopyard State Park, located in the town of East Haddam, is a wonderful locale for outdoor sightseeing, hiking, nature walking, and of course, camping.  The most popular and well-loved feature of this great park is Chapman Falls, an incredible waterfall that drops more than sixty feet over a series of steps in a Scottish formation known as “Schist Stone.” As you might expect, the water from the splash pool underneath the falls, which continues on to form the Eight Mile River, flows through Devil’s Hopyard’s hemlock covered picnic area, thus offering a serene setting for any type of family outing.

There are many myths surrounding the name of Devil’s Hopyard State Park, including one story about a man named Dibble, who once grew his own hops for beer brewing nearby. Through popular usage, Dibble’s Hopyard eventually became Devil’s Hopyard.  Another myth popular in the area says that the Devil himself passed by the falls and inadvertently wetted his tail. Angry, he burned holes in the stones with his hooves as he hopped away. This action, according to legend, created the many potholes near the falls—some of the most perfectly-formed potholes in the state—that were actually formed by stones as they made their way down the current, were trapped by an eddy and spun around, and wore a noticeable impression in the rock formation.  When the rocks were worn down, others world catch in the same hole and enlarge it; a process that was continued over and over again throughout the course of history.

Devil’s Hopyard has all the amenities one looks for in a great campground, including restrooms with running water, flush toilets and hot showers; picnic shelters and tables; BBQ grills, fire rings for cooking and campfires, and trash receptacles.  All campsites are available on a first-come, first-served basis, but because those sites near the falls tend to fill up quickly, those desiring to reserve those spots should come early and plan ahead.

Located deep in the woods in a town known as Promfet, Connecticut, Mashamoquet Brook State Park is an absolute treat for the senses and an outdoorsman’s oasis. Rich with a storied history, legend and lore, the park, with its aptly named “Wolf Den,” offers a wide range of activities designed to please and engage the entire family—activities such as camping, hiking, fishing, swimming and an assortment of outdoor diversions that will bring the whole family closer together.

Mashamoquet Brook State Park features two camping areas:  the Mashamoquet Brook Campground and the Wolf Den Campground.  The Mashamoquet Brook Campground offers 20 family tent sites that are very large, serene and secluded, while the Wolf Den Campground boasts an additional 53 well-manicured sites that come complete with tent pads, fire rings, BBQ grills, picnic shelters and more.  All of the campsites at Mashamoquet Brook State Park are open from April 1st until the first weekend in September (Labor Day Weekend). The campgrounds are available on a first-come, first served basis, and can also be reserved for Youth Group camping excursions.  Restrooms, picnic tables, and a playground are just some of the great facilities offered at this remarkable Connecticut state park.

Campers with a love of outdoor history will be pleased to learn that the Mashamoquet Brook State Park camping area, and its surrounding region, was once the domain of the Mohegan Indian Chief Uncas.  The name Mashamoquet is Indian for “stream of good fishing,” a name that was originally applied to the entire area. Later, the settler Captain John Sabin built a house here to serve as an outpost, and the settlement gradually increased in size. In 1723, parish and township privileges were granted and the town became known as Promfet, named after “Ponterfract,” a town in Yorkshire, England.