Mountaineers and adventurous hikers see more in Europe than beautiful and historical cities.

From the classic Alps to the Pyrenees, and the far off Caucasus Mountains, Europe offers a wealth of climbing opportunities of varying levels.

Though not the tallest in the world, they are a commendable testament to nature.

Unique formations and conditions make them both fun and challenging for even the best mountaineers.

When you think of Europe, you might not automatically think of Russia, but the Eastern sector, along with the prominent Caucasus Mountains are part of this geographical region, making Mount Elbrus the highest peak in Europe.

At 5,642 meters, Elbrus puts any peak in the Alps or Pyrenees to shame and draws hundreds of avid mountain climbers each year.

Technically an extinct volcano, this climb isn’t particularly difficult by most standards.

There are two routes, the Normal Route, and Kiukurtliu, which is slightly longer.

A chair lift on the Normal Route brings mountaineers almost 4,000 meters up. On either route, climbers have to use caution.

The climb looks easy but the altitude, crevasses, and often poor weather and quickly changing conditions make this climb challenging, and even dangerous.

Elbrus might be the tallest mountain in Europe, but the Matterhorn is probably the most famous. 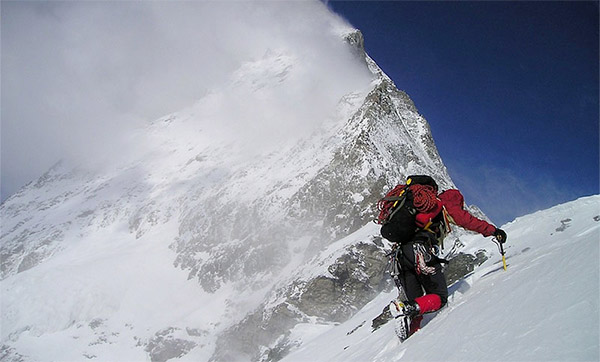 Sometimes called the world’s most iconic mountain, its four faces are steep and not for beginners.

The easiest route, Hörnligrat, brings climbers to about 3,000 meters in a lift.

Even on the easy route, you need to be ready to climb almost vertically over the rock and ice.

Snow, wind, ice, exposure, and the nature of the climb mean you can’t always make it to the top, but if you do, the view of the Alps from the top is simply breathtaking.

The only other peak in the Alps that could rival Matterhorn is perhaps Mont Blanc.

Standing 4,809 meters, it’s the highest part of the Alps.

Many mountaineers dream of climbing France’s most popular peak, with about 20,000 people attempting the climb every year to get a bird’s eye view of these famous mountains.

Although it’s certainly popular, and there are many routes of varying difficulties, it’s not a mountain for first-timers by any means – according to the Atlantic, Mont Blanc is Europe’s deadliest mountain, with nearly 100 deaths a year.

Although the Normal Route doesn’t require much technical difficulty or much equipment, just ice picks and crampons, Mont Blanc requires knowledge and caution for a safe climb.

Perhaps Mont Blanc is so deadly precisely because it is so popular, drawing many inexperienced climbers.

However, if you’re looking for a less crowded mountain, the highest one on the French Pyrenees, Vignemale, is a great option.

At 3,298 meters, most mountaineers can make it to the summit in a matter of hours.

Its prominent North Face boasts dozens of routes, some of which are good all year.

Although most tourists are drawn to Aneto, the highest mountain in the Pyrenees, Vignemale also has a glacier, and will lend itself to a quieter climb.

Compared to some of the other mountains on this list, Monte Perdido may be a gentler climb.

It’s steep, and still requires crampons and mountaineering skills, but is only graded as an F, suitable for the less experienced climber.

As you ascend, you’ll be met with panoramic views of the national park and lush valleys below.

While some climbs might require a guide and more technical equipment, at 2,499 meters Poland’s highest mountain, Rysy, is doable on your own.

The path is steep in parts but well-marked and seldom without visitors.

You’ll want crampons and an ice ax for the snowy and icy sections close to the summit, but the first part of the climb goes through a forested section and rocky areas.

The steepest portion has chains for support and it’s doable in summer and winter.

Since the mountain actually straddles Poland and Slovakia, it’s accessible from both countries.

At 2,912 meters, saying Corno Grande is the highest peak in the Apennines might not mean much to advanced mountaineers.

Even so, the relatively easy ascent on the normal route offers a perfect day climb, even for those with little experience.

However, keep in mind even the normal route passes through thing paths with sheer drops and scrambling up steep rocks.

For experienced mountaineers, there are a few climbing routes to the top as well.

Who wouldn’t want to climb the mountain of the gods?

There are a variety of trails of varying difficulty, refuges, and three main peaks, Skolio, Mytikas, and Stefani.

At just 2,917 meters, there’s no need to worry about acclimatizing. The paths are well marked and you can hike them solo.

If you don’t have much experience, you can hike many of the trails but the summits are for experienced hikers, and certainly no one who is afraid of heights.

To actually reach the Mykitas you’ll need to scramble over rocks and make a steep ascent.

Olympus has something for everyone, just make sure to get a good map so you can choose a path with the right difficulty level for you.

Most travelers in Switzerland head to Jungfrau or Eiger, but mountaineers looking for more of an adventure, and one with fewer people, should head to Finsteraarhorn.

Surrounded by glaciers, the most prominent peak in the Bernese Alps is more isolated and a bit harder to get to. But that’s part of the draw.

Mountaineers head over a glacier to the modern hut at 3,046 meters, stay the night to acclimatize then start out at first light to climb to the summit, another 1,228 meters.

From the hut, there are several paths to the top ranging from moderate difficulty to very difficult.

Europe’s many mountain ranges make it the ideal location for a mountaineering trip, even if you don’t have much experience.

The best time to go for mountain climbing is usually in July and August, but going a bit later in the year has other benefits, especially for those looking to ski their way down.

Wherever you choose to go, make sure you research your path in advance and have all the necessary equipment.