When you go camping, the point is to get away from it all. Not just from work, school, traffic and daily life, but from the chores that go along with it.

While it can be a lot of fun to cook over an open fire – s’mores or hot dogs, anyone? – it can also take a lot of time out of your outdoor adventuring.

If you prefer to spend your time in the great outdoors hiking, foraging and singing campfire songs, consider these no-cook camp foods that offer a lot of nutritional bang for the buck.

Refrigerated Foods to Take Camping That Require No Cooking 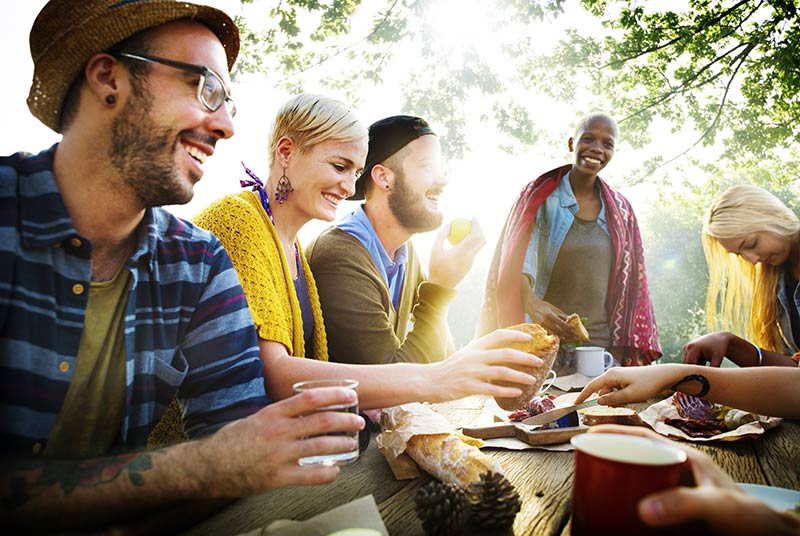 If you’re getting to your campsite by car, it’s a lot easier to bring a cooler. Though, many backpacking coolers keep foods cold for up to two days, so if you’ve got a member of your party willing to carry it, you can take some refrigerated foods along even in the backcountry.

When it comes to camp foods, quick and easy will get you to the hiking and exploring faster.

And when it comes to backcountry camping, light foods that pack a big nutritional punch is key.

Sandwiches are some of the quickest, most filling meals you can make while camping. And many sandwich ingredients keep well, which make them an even better camping choice.

Ingredients you might want to bring for sandwiches include:

Breads that pack a higher nutritional punch, like whole wheat, which typically has more fiber and more calories than white bread, are ideal for camp sandwiches.

And if you prefer more weight to more bulk in your pack, tortillas provide a flatter, less space-consuming alternative.

Pre-made salads are a versatile camping dish. You can use them to make sandwiches or eat them as snacks or side dishes.

Protein-based salads, like chicken salad, ham salad and egg salad, tend to have high caloric densities, which give them a good weight to nutrition ratio.

And while fruit salad won’t provide much by way of calories, it is versatile. You can eat it for breakfast, dessert, or a snack, and it’s a healthy option for all three.

It’s a great way to get in all your vitamins and minerals.

Cottage cheese is one of the healthiest dairy products, right after yogurt. That’s mainly because of its excellent protein content. Which makes it a great side dish for camp meals.

Yogurt also has an impressive amount of protein and that good bacteria that helps keep your gut clean.

One word of caution, though. Don’t grab a sixer of yogurts if you haven’t been eating yogurt regularly at home. You might end up spending your camp trip in the toilets or squatting behind a bush.

If you’re looking for protein-packed snacks, you can’t do much better than an egg. They contain more protein per ounce than just about anything other than meat. (Though, cottage cheese and yogurt do come close.)

I know I mentioned it as a sandwich spread, but hummus gets its own separate listing.

It’s calorie-dense, loaded with protein, and has a butt-ton of healthy fats. This makes it a great alternative for vegans and vegetarians. And a great spread or dip to eat with anything.

Just make sure you’re buying (or making) healthy hummus. Hummus made with alternative oils, sugar, or other unnecessary ingredients (chickpeas, tahini, fresh garlic, cumin, salt, and olive oil are all you need) just aren’t as good for you.

Foods to Take Camping That Require No Cooking and No Refrigeration

If you’re going to be camping in the backcountry for a while, you’re going to run out of cooler space. Or you may just prefer not to designate what little space you have to cold foods.

While it can be considerably more difficult to go on a long backpacking excursion without cooking (unprepared foods are simply easier to haul and often weigh less), it can be done.

Here are some good food options for campers that require no cooking and no refrigeration.

Yup. Here they are again. Not just because they are the simplest, most versatile camp food of all, but because many sandwich ingredients require no refrigeration.

In fact, you can eat many of the same things on sandwiches without dragging along a cooler. You’ve just got to change up how the ingredients are prepared or packaged.

Non-refrigerated sandwich ingredients you might want to bring along include:

Most cold cereals are nothing but empty calories, it’s true. But there are a few cold cereal options that do have decent nutritional value.

Granola-based cereals, whole wheat cereals (like Cheerios), and alternative ingredient cereals, like those made with flax, chia, or sweet potatoes, are good breakfast options that take no work and don’t require a refrigerator.

And, if you don’t mind boiling some water (like if you’re still going to have your morning coffee), you can opt for oats, which really just require a good soaking instead of actual cooking.

But what about the milk, you say?

No, it’s not the healthiest milk you can drink (ultra-pasteurization does kill some of milk’s good stuff), but it’s a source of protein and a topping for that cold cereal.

Just buy small boxes. Once the milk is opened, it has to be refrigerated or thrown out.

Scones are one of those things that can be reasonably healthy or absolutely horrible for you. It all depends on how they’re made.

Oat or whole wheat scones are healthier than scones made with white flour. Substituting a healthy oil and yogurt for the butter and milk in scones also increases their nutritional value.

If you can find a healthy recipe you like, with good substitutions and minimal sugar, scones are an easily-portable no-cook camp breakfast and snack.

Whole fruits are a great option if you’re camping at a vehicle-accessible campsite. Apples, bananas, oranges, and berries all make great no-cook additions to meals.

Not so much, though, if you’re backpacking to your destination. That whole apple or banana is going to get pretty banged up by the time you make camp.

That’s the beauty of dried and freeze-dried fruit. Similar nutritional value in a more portable form.

Nut butters are great back-up foods to bring camping even if you don’t plan to use them for meals. They are calorie-packed, protein-dense, and can be life-savers if you end up burning more calories than expected on the trail.

Granola bars are a lot like cold cereals. They can be laden with sugar and super bad for you, or they can be a nutrient-dense snack or meal alternative.

When shopping for granola bars, the two things to keep in mind are carbs-versus-protein and sugar content. While you’ll need plenty of carbs while camping, you won’t stay full very long on carbs alone.

Look for granola bars with whole ingredients, like KIND bars and Larabars, and opt for their lowest-sugar options.

For those who thrive on protein, meat jerkies can be a perfect camping solution.

However, many meat jerkies contain added ingredients, including sugar, which act as fillers and reduce the amount of protein, vitamins, and minerals. So, look for natural jerkies that only contain meat and salt.

Keep in mind, though, that all jerkies have way too much sodium. While it won’t hurt you on the occasional camping trip, it shouldn’t be an all-the-time solution.

And, if you’re opting for cured meats as one of your camp meals, leave the jerky behind.

Nuts are excellent sources of a lot of good things, including healthy fats, vitamins, minerals, and protein. They are one of the most nutrient-dense foods you can carry with you on a camping trip.

Nut-based trail mixes often contain other powerhouse ingredients, as well, such as chocolate and coconut, which are also calorie and nutrient-dense and provide additional vitamins and minerals to keep you healthy and balanced on the trail.

Popcorn is a healthy whole grain snack that is low in calories, but packed with fiber, which can help you feel full.

The value of chips as a snack is dependent on the type of chip you choose. Bean-based chips (like falafel chips and black bean chips) have considerably more protein and fiber (up to 4x more in some cases) than regular potato chips.

Don’t leave home without dessert. That’s a motto, isn’t it?

Cookies and brownies might not be your healthiest snack options, but they do pack a lot of calories.

If you have the occasional sweet treat at home, there’s no reason not to bring some along.

The sugar is great for reviving your energy and motivation while on a long trail, and you’ll work off the calories and get your blood sugar levels back to baseline much quicker than you would sitting in an office chair or at home on your couch.