In addition to outdoor activities, some campers like to kick things up a notch by playing games when they camp.

Camping games are a great way to fill some of the many hours of down time that camping offers.

They are great for bonding, laughing and just enjoying each other’s company.

So, if you would like to play games on your next big outdoor adventure, you have come to the right place.

Here we have highlighted several great camping games for adults, and provided a brief description of each game and how to play it. 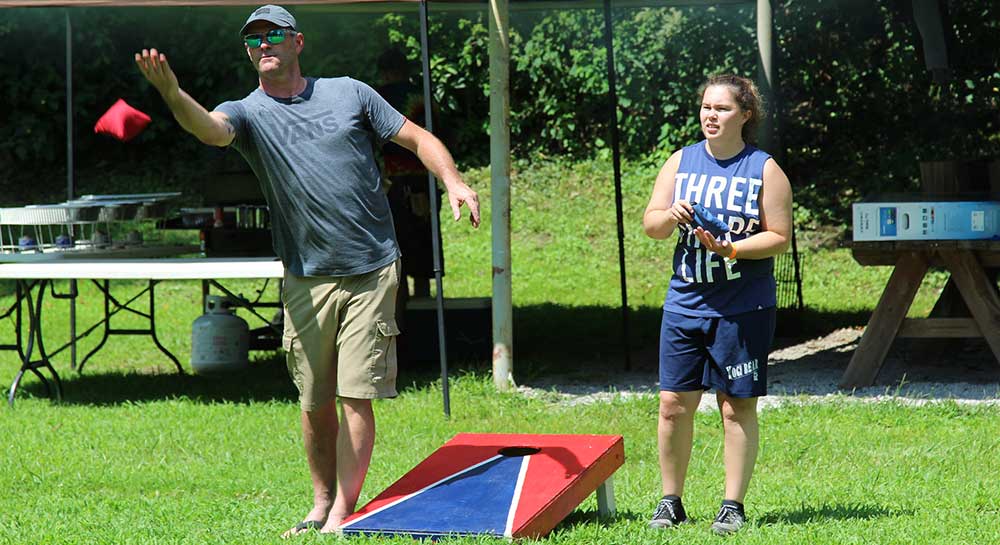 Scavenger hunts can be a lot of fun when modified for adults, and no place is a better setting for this time-tested game than the great outdoors while you are out camping.

Simply come prepared with a list of things the participants will need to find, from simple items like twigs and rock to rarer items like fishing hooks, certain types of flowers or different kinds of bugs.

This works well when the participants are split up into pairs, giving them a chance to work together towards a common goal and providing some companionship as they attempt to find some of the items that are harder to get one’s hands on.

If you really want to plan ahead, or if you are going to a campground that is very familiar to all, you can plan a specific route that the participants need to follow. Best of all, scavenger hunts take time, so it’s a great way to burn the daylight hours before the nighttime festivities begin around the campfire.

Everyone has that competitive streak in them—some more than others. That’s what makes an activity like the Camping Olympics so much fun and joyful.

In the camping Olympics, you merely create a set of individual and paired activities. These can range from relay races, with things like the wheelbarrow and three-legged race; canoe races, swimming relays, puzzles, and fishing competitions for the longest or heaviest fish.

You can even create medals and hold an awards ceremony after the events; and you can even adapt the events so that the older and less active members of your camping party can equally participate in all the fun and hilarity.

Players, usually teams of two, stand next to these stands, and attempt to throw bean bags through the holes for points.

Cornhole is an absolute riot when it is played when camping. It is challenging, conversational and very social.

Sometimes it is even played as a drinking game and things get very wild. It is definitely something you should try out on your next camping excursion. Check out some options from Amazon below.

If your campground does not have a horseshoe pit on the grounds, you can always substitute with a great game of Horse Stones. This game is relatively old and was originally enjoyed by adults in ancient Rome.

In the early days, the game was first called “Quoits.” During that time, the game consisted of soldiers burying a box in the ground and throwing arrows into it—a competition they used to pass the time when they were in the field.

Today, the object of the Horse Stone game is much easier and more simplified. All you need is an empty box or a camping bucket placed on the ground at a point where the distance is the same for everybody participating in the game.

Each of the players takes a turn and attempts to throw pebbles into the box. A running score sheet is kept to tally all of the pebbles each player was able to successfully throw into the bucket. The player with the highest number of pebbles in the end wins the game.

Like cornhole, this game can be played with a lot of variations. When played as a drinking game, the player with the lowest pebble total would be forced to take a drink—and as more people drink, their aim gets way off. This is enough to cause merriment to break out among your camping group.

Poker (and other Card Games)

If your campground has a picnic table you have a perfect place to break out a game of Texas-Hold-Em. Poker is all the rage now, and because of all the different variations available, you and your group will never get bored playing this game.

All you need is a deck of cards and a set of poker chips and you are ready to go. If you have never played Texas-Hold-Em before, here is how the game is played.

Each player in the game is dealt two cards face down. Once these are dealt, the first round of betting starts, where players can either see the bet, raise or fold their hand.

Next, three cards are dealt face-up in the middle of the table. These are community cards. The idea is to make the best five-card hand using the cards in the middle and the two cards in your hand.

Once the first three community cards are dealt face-up—called the “Flop,” another round of betting ensues, following the same pattern. Then one more card—the “turn card”—is added to the community cards and betting continues.

Finally, the last community card is dealt—called the “river”—and a final round of betting happens. Again, the goal is to make the best five-card hand using any combination of the 5 community cards and the 2 cards in your hand.

The player with the best hand in this fast-paced game wins the money in the pot. Just for review, the best five-card hands in poker, from worst to first, are indicated below:

If poker isn’t your thing, you can always play other card games, such as spades, hearts, and gin rummy, to pass the time.

A historically classic game that turns every get-together into a raging party is the game of Truth or Dare, one of the most popular games among adults when camping. The rules of the game are very simple: you are asked a not-so-easy-to-answer question by a member of the group and you must choose between the two choices: Truth or Dare.

If you choose truth, the person who called on you is allowed to ask you ANY question they wish and you must answer honestly. This can be an embarrassing question in which the person tries to find some dirt on you, a deeply personal question or just a silly question to keep the game lighthearted.

If you choose dare, on the other hand, that person can dare you to do something and you must comply. Examples are: “I dare you to sing a song, do a dance, or go to that campsite of strangers and ask them for one of their beers.” Naturally, when the participants choose “dare” as their option the game can get pretty fun in a hurry.

Truth or Dare is a game that will help you reevaluate just how well you know your friends and vice versa. When played with tact, it can be a great camping game for adults, one that can expose a lot of secrets about yourself and your friends. It’s a game every adult should play at least once in their lifetime—and what better time than when camping?

Two Truths and a Lie

Last but not least, we get to the game “Two Truths and a Lie.” In this great camping game, players sit around the campfire and take turns telling the other players two truths about themselves and one lie.

Then, the other players have to take turns guessing which of the statements was untrue. The one that guesses the correct answer wins.

This is another great game for getting to know more about your camping friends and connecting with them more deeply.