If you’re getting into ultralight backpacking, then hammock camping is likely your go-to option instead of a tent. But the thing about camping in a hammock is that you’ve got no protection from the rain and bad weather.

That’s why you need to know about a hammock ridgeline. But what is it?

A hammock ridgeline is the cord that is suspended above the hammock, which you use to drape a tarp over to protect you from the elements while you sleep in the hammock. A ridgeline also defines the amount of sag a gathered-end hammock has.

Some camping hammocks come with an integrated ridgeline, like the Hennessy Hammock Expedition Asym Zip Hammock. Otherwise you need a paracord or something similar for your ridgeline.

In the photo above, you can see a hammock without a ridgeline – if you went to sleep in that, then you could easily get rained on.

What You Should Know About Hammock Ridgelines 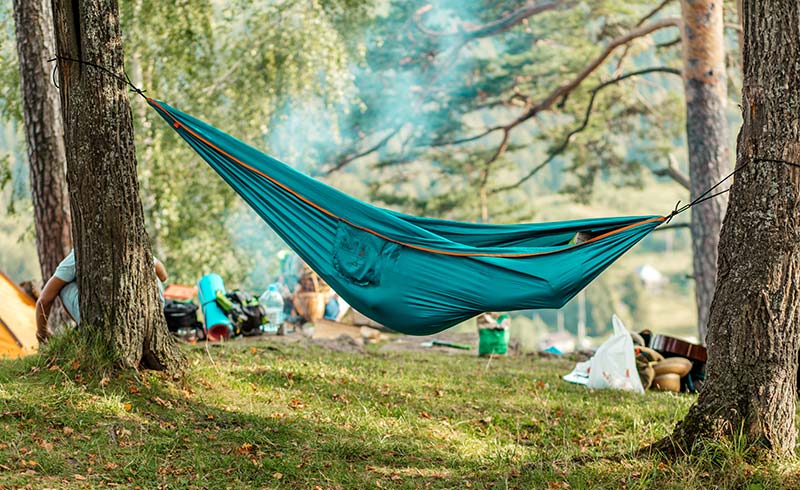 If you ask some ultralight backpackers, then they’ll tell you that ridgelines don’t support tarps. And that’s not entirely true.

Yes, tarps often have their own ridgeline – meaning that your hammock can have a separate one. In this instance, the purpose of your hammock’s ridgeline is to define the amount of sag a gathered-end hammock has.

Why would your need a hammock ridgeline for this purpose? Because the distance between trees will vary, but with a ridgeline in place the sag in the hammock will stay consistent.

As one camper pointed out,

So, here’s the thing – you can also hang things from the hammock ridgeline. Things like your glasses….or a mosquito net or tarp.

If you’re going the DIY method, then it’s best to use some paracord for your ridgeline before tossing that tarp over it. Here’s what that might look like:

In the image above you can see a piece of paracord is tied as a ridgeline near where the straps are affixed to the tree. This how you DIY a ridgeline for your hammock with paracord and a tarp.

But, as previously mentioned, you can actually buy some hammocks that have integrated ridgelines. This is definitely the better option.

Hennessy Hammock seems to sell all of their hammocks with integrated ridgeline. You can see what one of those looks like in the image above.

Do You Really Need A Hammock Ridgeline?

Honestly, this really comes down to a personal choice for you and what kind of camper you are.

If you’re wondering why you should care about hammock sag, then you should know that what I’m referring to here is your comfort when you’re sleeping.

As you can see, there are some good reasons to use a hammock ridgeline the next time you plan a hammock camping trip.

However, you don’t have to use one in order to camp in your hammock. But you just might be more comfortable out there if you do.