The MiniMo and MicroMo are both made by the Jetboil company, and each of these cooking systems offers a unique way to cook when enjoying the great outdoors. But which one is the better option for your outdoor cooking needs?

To help you understand the differences and similarities in these two cooking systems, below we will describe each system in some detail, including the pros and cons of each product, and allow you to decide for yourself the system that best fits your specific needs and preferences.

About The Jetboil MiniMo

The Jetboil MiniMo can best be described as an integrated stove system that offers a very efficient and convenient way to cook meals when camping. The Jetboil MiniMo comes complete with all the parts you need to begin cooking, and all in a very compact package that is easy to store and install. 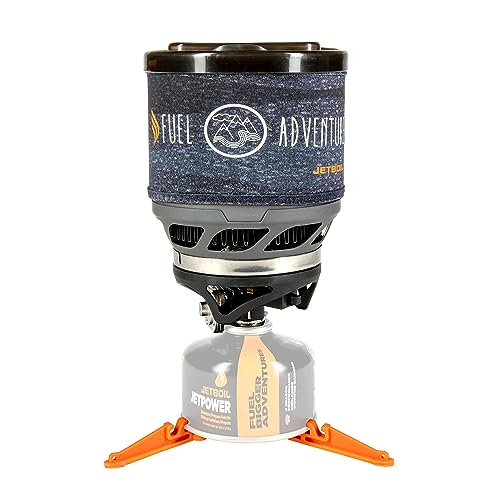 The product offers rapid boil times, ensuring you can always have a hot meal after a long day of hiking; and contains many unique features, not the least of which are its push button ignitor, sturdy metal handles, a wide pot shape and a secure lid with pour spouts. The entire unit weighs just 14 ounces—not the lightest product on the market—ensuring just minimal weight in your pack.

Here are just some of the things (specs and features) that you can expect with the Jetboil MiniMo:

When we say the Jetboil MiniMo is a “fully integrated” stove system, what does that mean exactly? Well, it means the unit consists of both a stove and a pot, and that pot is designed to securely attach to the stove.

Some of the other products such as these tend to sell the stove and the pot separately. And while an integrated system is a bit heavier and more expensive than its non-integrated counterparts, it is definitely more convenient, fuel efficient, stable and offers faster cooking times.

As we mentioned in the introduction, the Jetboil MiniMo is NOT the lightest stove system of its kind. Some of the other products in this category are significantly lighter, but if you are just a casual hiker the weight should not bother you too much, especially when you consider all the other benefits we mentioned above.

Like most of the other Jetboil cooking systems, the Jetboil MiniMo stacks up very well against others when it comes to durability and quality. Made from the strongest materials, the Jetboil MiniMo is sure to give you years’ worth of rugged service as you hike and camp in some of the most remote areas the country has to offer.

Fuel efficiency is huge when it comes to an integrated cooking system, and in this category the Jetboil MiniMo also scores high marks. There are many reasons why the Jetboil MiniMo is so fuel efficient, but the most notable of these are its state-of-the art burner, its secure connection and its better than average wind performance, meaning the burner can withstand a lot of wind without going out. The Jetboil MiniMo can also boil a pot of water very quickly, which also saves on fuel.

Speaking of boil time, the Jetboil MiniMo has no equal. In independent tests, the Jetboil MiniMo boasted more rapid boil times (less than 2 minutes in total) than any other integrated cooking system. This rapid transformation from cold to boiling makes the unit extremely fuel efficient and enables you to get your food ready in a snap.

So how packable is the Jetboil MiniMo? Because all the components on the Jetboil MiniMo nest together so compactly, which includes the 100-gram isobutane fuel cannister, the unit is very compact and easy to stow away in your pack. With systems that are not integrated, hikers would have to make separate space for both the unit and the pot, not to mention the fuel cannister.

Because the Jetboil MiniMo is an “integrated” stove system, it tends to be much more stable than units that are segregated. Stability is very important in a unit such as this. After all, the last thing you want is for the unit to fall over as it is boiling water, potentially causing you injury. To help with this stability, the Jetboil MiniMo comes with a three-pronged stand that allows it to sit flat and easily on any flat surface.

Like all of these cooking systems, the pot that comes with the Jetboil MiniMo has markings on the inside where you can measure a certain amount of water or other liquid. Unfortunately, we found that these markings are not very accurate. The good news, though, is that the unit comes with a very accurate measuring cup, which also serves as a bowl and bottom lid for the unit.

The integrated pot on the Jetboil MiniMo is wide and shallow in shape, much like a bowl. This makes easting directly out of the pot that much easier. The lid fits very securely on the pot to avoid spills, and the convenient pour spout allows you to mete out the goodies you cooked without burning your hand.

Push-button ignitors, such as the ones you find on grills, tend to wear out and break over time. However, not only is the push-button ignitor on the Jetboil MiniMo a very convenient option that makes firing up the stove easy, it also tends to last longer according to user reviews.

Boiling water over a camp stove or fire pit is definitely one way to go when you need hot water, however if you choose this method you have no way to simmer that water after it has been boiled. Not so with the Jetboil MiniMo. Its simmer control is very convenient and allows you to keep your food hot and ready to eat without burning it.

One of the great features of the Jetboil MiniMo are the sturdy metal handles alongside the integrated pot. These handles can prevent accidental burns and make straining the water very easy indeed.

Want to enjoy some backcountry coffee in the morning? If so, you are going to love the French Press attachment on the Jetboil MiniMo—just remember to pack out all your waste, including the coffee grounds.

Pros and Cons of the Jetboil MiniMo

There are plenty of things to like about the Jetboil MiniMo, but there are also some notable drawbacks with the unit. Let’s take a closer look at these pros and cons:

About The Jetboil MicroMo

Because the Jetboil MicroMo offers many of the same features and benefits as the Jetboil MiniMo, we will not have to spend as much time talking about this unit. What you should know right off the bat, however, is that the Jetboil MicroMo was the company’s attempt to fix the few deficiencies with the MiniMo, without sacrificing its many benefits. 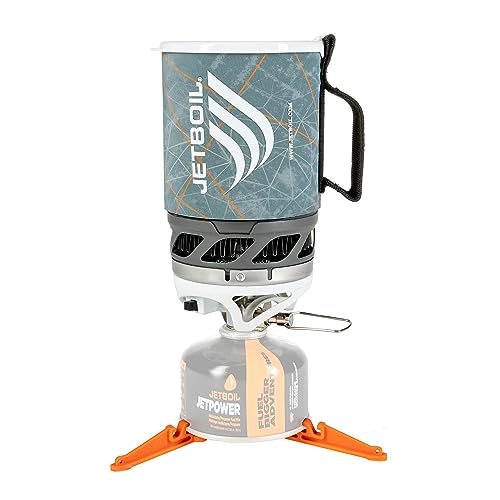 The Jetboil MicroMo is the latest in a long line of the Jetboil Company’s impressive line-up of personal cooking units for hikers, campers and those that love to spend time in the great outdoors. In making this model, the company tried—and succeeded, in our opinion—to make a compact, lightweight solution for backcountry cooking without sacrificing any of the quality, features or performance associated with their other cooking systems—features that include the much-appreciated simmer control.

With that being said, some of the most impressive features of the Jetboil MicroMo are as follows:

Like the MiniMo, the Jetboil MicroMo comes with a push-button ignitor that can stand the test of time. The flame control seems to work well and be very sensitive in the first three turns, after which it produces a very intense and focused flame.

The boil time of the Jetboil MicroMo is every bit as good as the MiniMo, with times ranging from 114 seconds to 132 seconds. This rapid boiling time also helps significantly with fuel efficiency.

Finally, like its predecessor, the Jetboil MicroMo is extremely well-made and very durable. No other integrated cooking system on the market, in fact, offers the long-lasting quality that is offered by Jetboil products.

Pros and Cons of the Jetboil MicroMo

Which Is Better – the Jetboil MiniMo or the MicroMo?

Both the Jetboil MiniMo and MicroMo offer a lot of great features. Among these are rapid boiling times, fuel efficiency, stability and simmer control.

The Jetboil MiniMo is a larger unit, making it heavier and not quite as packable, but its large size also means it can accommodate more people.

The MicroMo is smaller and lighter in weight, making it more portable, but it lacks some of the features of its predecessor, including the handy pour spouts on the lid.

Either way, both are great options for cooking outdoors.

2 thoughts on “Jetboil MiniMo vs. MicroMo – Which Is Better For Campers?”