Did you feel like a renegade when you got your first tattoo only to start seeing them everywhere shortly thereafter, on everyone- the buffalo wings delivery guy, your dentist, your mom’s best friend?

You suspect they were always there – some under the surface, some in plain sight- but you failed to notice them.

Or maybe it was trying hummus for the first time.

Having a “where have you been all of my life moment,”  and then realizing people have been buying it by the pound from the grocery salad bar for decades.

Finding flint is the same way.

One day it’s not on your radar. Rocks are just rocks.

Then, you read a little article about starting fires with flint and plunge down a rabbit hole regarding all things flint and fire.

You emerge with eyes attuned to that glistening black quartz and a need to search for it, all the while wondering how you entered this “flint” zone.

“Flint” is one of those words that gets tossed around like we’re all supposed to recognize it as second nature.

Flint knapping produced arrowheads across archaeological sites. Fred Flintstone did his best to represent cavemen back in the day.

But we weren’t all born knowing how to create campfires from rock and forge weaponry from stones.

Yet, finding (and using) flint, also known as chert, is a fundamental skill that you can master.

Hop forward to today and you’ll discover being able to find flint in today’s landscape can give you even more freedom when you’re camping, canoeing or hiking a remote trail.

Being able to start your own fire with durable materials that can withstand rain and snow is a priceless survival skill.

With know-how and practice (and maybe a tutorial), you can start a toasty fire with a couple of pieces of flint, a steel, and good kindling.

To use flint, though, you need to have flint- which means, you need to forge a relationship with a flint fairy, buy it, or find it.

The first option is non-existent. Said fairy would be too weighed-down with rocks to fly.  The second option is doable.

There are sites that can hook you up with flint and strikers. This might be the way to go for you (if you’re willing to miss out on the thrill of the search).

The third option is adventurous, productive and liberating! Nothing beats a discovery effort, especially one that saves a little money.

It’s important to understand some fundamentals about flint in order to find it. 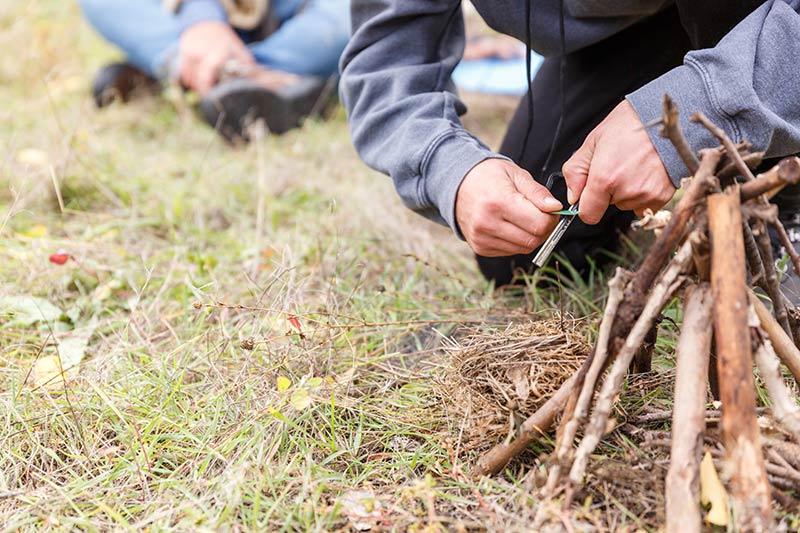 Where To Find Flint

First, train your eyes to recognize the landscapes where it’s commonly found.

Flint occurs naturally in many states in the U.S.. where there are limestone deposits, remnants of ancient oceans and along existing or long-gone waterways.

According to Sciencing, flint is found in geological formations in nearly half of the United States.

Flint is a sturdy rock that’s resistant to erosion.

Therefore, it can often be found near existing or dried up waterways where other rock has been worn away.

In areas where rushing water might have eroded limestone, you might find a black hard chunk of flint exposed.

It might crop up when soil is tilled for farming or when land is broken up to make way for construction.

If you’re a history buff, consider the archaeological record near you.

Are there sites that have been known to reveal an abundance of flint arrowheads or tools?

Are there records or theories indicating where those people found the flint they used?

While you can’t go dig on private land, knowing that there is a history of flint finding in a general area can enrich your search.

But, interestingly enough, if you don’t happen to live in one of those 22 mentioned states, you might still find flint close to your home.

Flint is frequently included in the mix of stones used in gravel on non-paved roadways all over the place.

Wherever you are, look up at rock walls. Check out river banks.

Look down at the road you’re traveling.  You might happen upon chunks of this useful rock.

There are many different shades of type of flint (otherwise known as chert). All flint is a type of quartz.

Flint that is most commonly used for fire starting can be recognized by its deep gray or black glossy color.

But, flint comes in an array of colors. Try what you find.

Tan flint might do the trick just as well as the more commonly lauded black.

The other characteristic that makes flint recognizable is that it is very hard.

Take something made out of glass that is safely tote-able with you when you know you’ll be looking for flint.

When you scrape a piece of flint on glass, it should leave a mark.

If you don’t want to carry glass with you, you can use something made of high carbon steel to strike the promising rock.

Flint should spark. It can also have very sharp edges.

So, take precautions not to cut yourself. Or at least have some band aids on hand in case you do!

If you suspect a softer rock might be concealing a durable chunk of chert, crack it open!

Try breaking open small rocks you find near areas where flint is known to be present or try busting or dusting off a few rocks from a gravel road to see if flint is inside.

A hammer or a large rock might do the trick.

Whether you are in an area with naturally occurring flint or not, get out and look!

It’s likely there for a keen eye to spy.

Once you find your first flint and fashion your fire, it is sure to spark your quest to find more. Happy hunting!