Campers and other outdoors people use coolers to keep their drinks and snacks cold when they are enjoying the wide open skies. Coolers also serve a variety of other purposes, and are even used in certain facets of the medical field.

And when it comes to coolers, nobody does it better than YETI. Since their introduction, YETI coolers have rapidly grown into an iconic brand, an emblematic symbol of high quality.

However, in order to enjoy that quality you will definitely have to pay more for the privilege—up to 10x more in some cases.

So why are YETI coolers so expensive in the first place—and is it worth the huge price tag? This has remained a burning debate over the years, and now it is time to deal with that question once and for all.

Contents show
The Inception of YETI Coolers
What Sets YETI Coolers Apart from Standard Coolers
So, Why Are YETI Coolers So Expensive?
First of Its Kind
Advertising
Ice retention time
Marketing and Distribution
Unique Features
Extended Warranty
Quality and Appeal
But, Are YETI Coolers Worth The Huge Price Tag?

The Inception of YETI Coolers 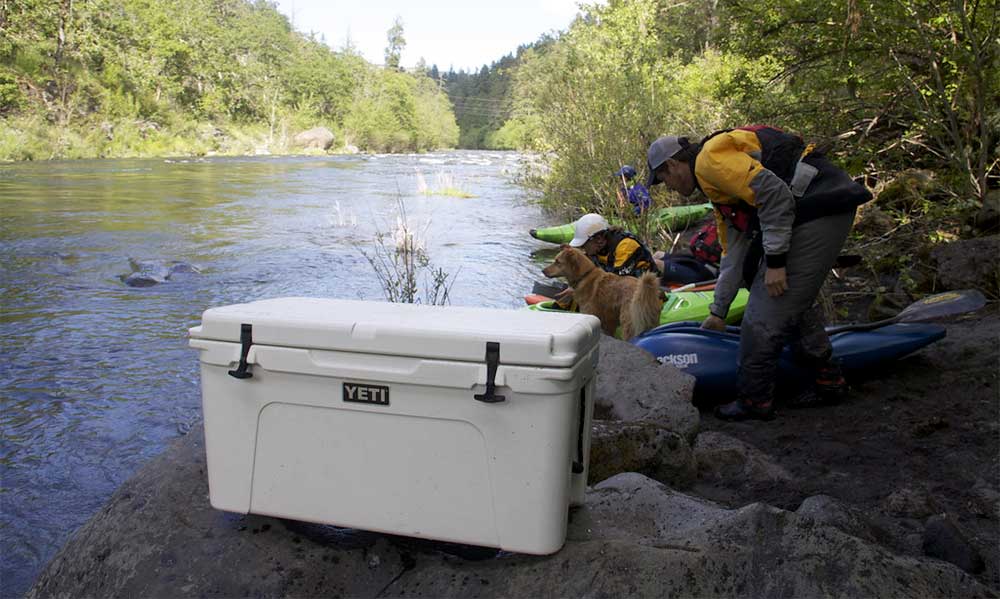 The Seiders brothers (Roy and Ryan) were proud outdoorsmen that became frustrated over the low cooling quality of most coolers or ice chests on the market. They were upset that there was no cooler in the market that could preserve the freshness and chill of their beverages and the game they had killed in the field.

Because of this, they partnered up with a Philippine company to create a cooler they termed indestructible, and named them after the mythical creature also known as Bigfoot. Thus, the first YETI coolers made a surprise market appearance in 2006, and today the then-small company is now worth over $1.5 billion dollars.

YETI coolers differ from other types of coolers in many ways, including the materials used to make them and the manufacturing process. YETI coolers are manufactured through a process called roto-molding—the same process used for making kayaks.

In roto-molding, polyethylene is subjected to low pressure and high temperature to create a hollow plastic structure in a single piece. The next step involves injecting the shell with as much as three inches of polyurethane foam of commercial-grade.

The design and manufacturing process described above also gives the YETI cooler a degree of ultra-rigidity and durability that regular coolers simply cannot attain. If regular coolers slip and fall, they are likely to break or crack, but the YETI coolers can survive intense pressure including being thrown off a cliff or dropped out of a moving vehicle.

However, as we explained in the introduction, the increased toughness of the YETI cooler comes at a cost—and it also makes these coolers weigh a lot more than traditional coolers. For example, the YETI 45 (37-Quart) model, which is one of the most popular of the company’s brands, weighs 23lbs when empty. Fill it up with ice or beverages and you have a major workout on your hands.

So, Why Are YETI Coolers So Expensive?

The price of the YETI cooler is indeed shocking, especially when you consider that coolers of the same size typically go for about a tenth of the price. Still, people still flock to the stores to get their hands on a YETI. If this has you a bit intrigued, you might want to read on to see “why” the YETI cooler is so expensive.

First of Its Kind

The YETI cooler was the first roto-molded cooler to hit the market, and those that were lucky enough to have one have stayed mostly loyal to the brand. YETI coolers have become a symbol of quality and a point of reference for all other coolers.

Even the newer types of coolers, those that have also been roto-molded, cannot seem to get in on YETI’s popularity. YETI made the first impression (a good one at that) and people are ready to stick with them to the end.

The right advertising campaign engrains a brand in the minds of people that see it. This is one thing that the YETI brand is doing right and others are still struggling with. YETI has succeeded brilliantly in putting adventure in the heart of its branding. So, for many people planning an adventure, one of the top items on their itinerary is a cooler, a YETI cooler. The lure remains the promise of a rugged, all-American, outdoor lifestyle, and nobody does it better than YETI.

YETI coolers offer an ice retention time of 5-7 days. Before the arrival of YETI coolers, the regular coolers on the market could only retain ice for a maximum of 2 days—if that.

The walls and roof of YETI coolers are two and three inches thick. This thick layer of insulation is what keeps the heat out and the cool in.

The extended ice retention is one of the reasons why YETI is so popular today. However, competing brands like Orca, Canyon, and Pelican now have models that are able to retain ice for 7 to 10 days.

You should know that in order to get the maximum ice retention time, you will need to prepare your YETI cooler before use. Preparation here means pre-cooling your YETI with ice bags a day prior to its use. If Yeti coolers are kept in warm places, the insulating foam will start out warm thereby melting whatever ice is inside. If not prepared before use, you will get an ice retention time of 2 days max.

A highly effective marketing strategy is probably the main reason why YETI is so expensive even in the face of various competing brands. YETI was smart enough to control their distribution channels and keep them watertight.

They preferred to sell to small local stores rather than to giants like Wal-Mart and Costco. In the past when YETI discovered that Costco was selling their coolers, they tracked the source and shut it down.

In the stores where the YETI cooler is sold, they do so at a very thin margin, therefore making it almost impossible for those stores to offer discounts or risk losing money. The high cost of the YETI coolers also make them more profitable to small businesses.

They could make a good profit margin from selling just 2 YETI coolers compared to what they would make from selling five or ten regular coolers. This closely monitored distribution gives YETI total control over its pricing.

The same features that distinguish a YETI from regular coolers are also part of the reason why they are so expensive. Basically, what the YETI brand is selling is 5 to 7 days of ice retention, heavy insulation, and an almost indestructible cooler.

If you bring all these together, the YETI brand is selling a cumulative experience and not just a single item. Paying for that experience is always worth more than just an item.

Over the years, the brand has been able to justify its expensive price through the experience it offers. This is also evident in their ads.

Most regular coolers do not have warranties at all. YETI’s Roadie and Tundra range of coolers have a full 5-year warranty. This means that within five years of purchase you could have any of the parts replaced if they go bad.

If you are familiar with warranties you will understand that it costs the manufacturer money in shipping new coolers or replacement parts to customers who have a problem with their purchase. This also explains why some companies will require the customer to pay some amount for extended warranties.

While the YETI coolers are built tough, the truth is that they can still break. Hence, when you are paying for a YETI you are also paying for a 5-year warranty. It is understandable the impact this would have on the price.

YETI puts in a lot of effort to maintain the quality of their products and they pay close attention to the finest details. This attention to detail is very important to customers.

With the YETI brand you are getting a cooler that has luxury appeal. When you place the YETI coolers side-by-side with other competing brands you will understand this feel better.

But, Are YETI Coolers Worth The Huge Price Tag?

When you decide to purchase a YETI cooler, you are not only paying for a quality brand with a premium finish, you are also paying for the YETI experience—something you can’t get from other brands (at least for now). However, everyone’s value system differs and this can ultimately affect your judgment regarding the overall worth of YETI coolers.

Click Here to Check Out REI’s Selection of YETI Coolers